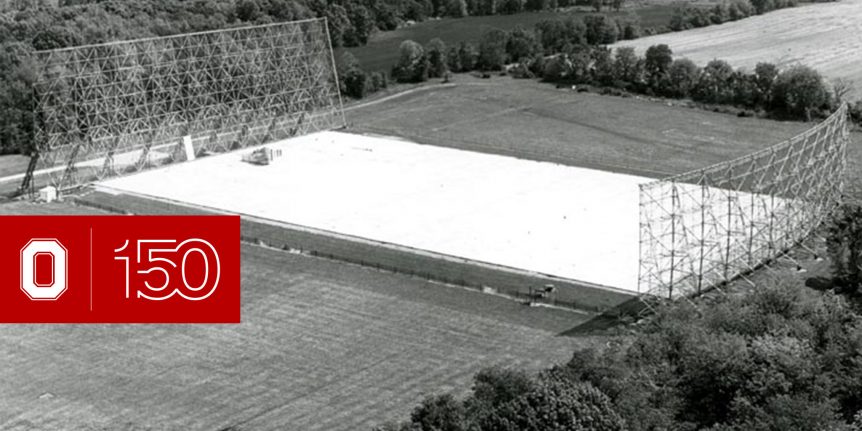 John Kraus (1910-2004) joined the Ohio State faculty in 1946. His fascination with the potential to use radio waves to “see” the universe began during his undergraduate days.  Among his inventions are the helical antenna, which became the workhorse of space communication, the corner-reflector used by millions for television reception and, most famously, the Big Ear radio telescope. Built by Kraus and his students, the Big Ear reflected rays from a tiltable flat reflector panel onto a fixed parabolic rectangle, measuring 110 meters by 21 meters, which in turn, focused the signal to a central point at ground level. With the Big Ear, Kraus and colleagues studied some of the most distant known objects at the edge of the universe, and produced extensive surveys of the radio sky.  In 1977 the Big Ear detected the still-unidentified “Wow!” signal (named for the data analyst’s marginal notation) that suggested the intriguing but still elusive possibility of intelligent life elsewhere in the universe. Although the Big Ear was demolished in 1992, design concepts remain in use as it served as the model for a French radio telescope four times as large as Big Ear, and still in use.

Kraus was a member of the National Academy of Engineering, and won numerous awards including the Sullivant Medal from Ohio State in 1970 and the IEEE Edison Medalin 1985 “for a sustained career as an innovator, discoverer, and educator in the fields of antennas and radio astronomy.”